The second in an ad-hoc series of geo-specific New Weird Australia compilations, featuring eighteen bands and artists from Perth in Western Australia.

Western Schism is the second in our ad-hoc series of geo-specific compilations, featuring eighteen bands and artists from Perth in Western Australia.

The distance from Perth to Sydney (coast to coast) is only marginally less than the land mass span between L.A. and New York. Think for a moment on all the East Coast / West Coast paradigms that exist in American culture, and you can transplant some of that ideology down to Australia. Whilst we don’t have competing hip hop crews as such (although there was a moment back in the day when drum’n’bass might have taken on that skirmish), each coast often exists in its own unique world, often oblivious to the actions of the other.

However, whilst L.A. artists might have opportunities to play to audiences in San Francisco, Las Vegas, San Diego or similar towns and cities along the coast, their Perth cousins have no such luck. Isolated from any other metropolis or cultural hub, the act of generating awareness, finding new fans or growing a career used to involve an expensive and lengthy hike to the West, to connect with the majority of Australia’s population. Of course, that’s old school thinking – the digital age affords artists the ability to transcend such barriers, and this compilation plays one small part in an ongoing, flag-waving awareness exercise for Perth’s experimental music community.

The schism herein is as much geographical as it is artistic. These artists are outliers in both the literal and creative sense of the word – they celebrate their physical relationship with the world by amplifying it artistically. Distance need not be a tyranny – as is shown in this collection, it may in fact give us just the space we need to run free and get wild.

“Album Of The Week … the collaboration between Sinclair and James Ireland is the standout – the throaty vocal contribution, stretched and warped to within an inch of its life, is backed by a sluggish, occasionally forceful beat, and the track as a whole pulls you in and wraps right around you … this album brings together some of Perth’s finest merchants of noise and is well worth seeking out.”
Drum Media / The Music, August 2012

“Western Schism provides an accessible framework through which non-experimental music schooled individuals could be encouraged to experience what might initially be thought of as ‘outsider’ sounds. It’s a nice tribute to the Perth artists who have shaken off the shackles off that ol’ ‘isolation’ buzzword to basically just get on with it.”
The Thousands, August 2012

“Perth seems more than adequately provided for lately when it comes to experimental sounds – hence the timely release of the New Weird Australia, Western Schism, entirely focused on artists from WA…”
Interview with Stuart Buchanan, The Wire – The West Australian, September 2012

“It’s great to gain exposure to new experimental work from WA, so nice work New Weird.”
Who The Hell?, August 2012

“We’ve been big fans of New Weird Australia for quite a while here at Life Is Noise. On a regular basis they dump some great compilation on the internet and introduce us to a whole pile of crazy music we might otherwise not have heard. This time round, they’re focusing on Western Australia, with Western Schism taking a look at some of the more interesting artists from WA. There’s more than a few familiar names for regular readers of Life Is Noise, but there’s two or three we haven’t yet featured.”
Life Is Noise, August 2012 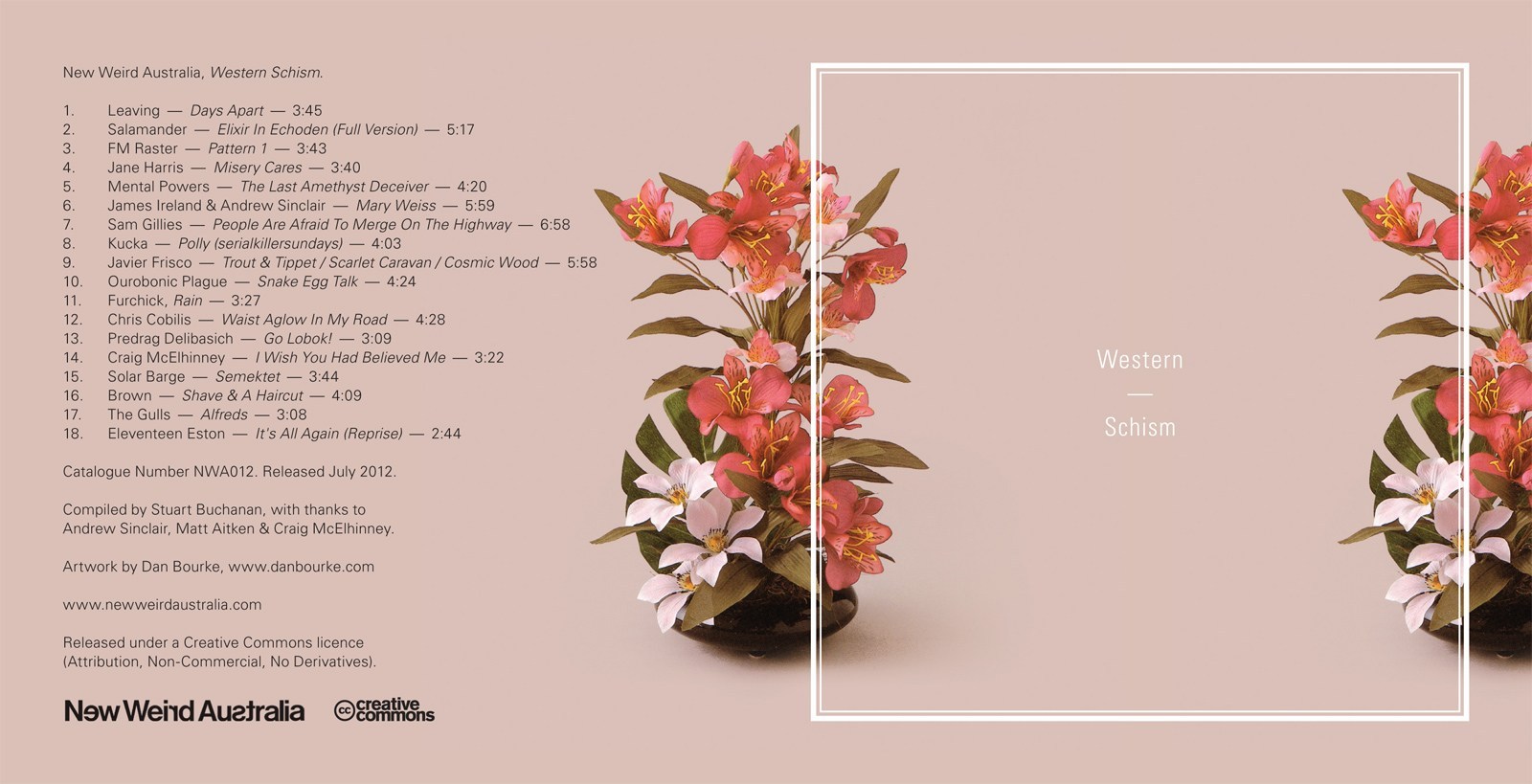