New Weird Australia, We Are After All Here | NWA008

Throughout 2009 and 2010, we were listening to a heap of bands and artists that were clearly starting to coalesce into some form of vague and abstract grouping. Either through sound, technique, image, a reverence for the past, or just a common, skewed take on a hauntalogical notion, there was a broad church emerging that would count these artists among their flock.

Last year, we shifted the focus of the New Weird Australia compilation series away from a free-for-all approach to something that would have a sharper curatorial focus. Something you could put handles around (so to speak).  Something you could clearly identify as “a compilation about X or Y or Z”. “We Are After All Here”, volume eight in our compilation series, does have a theme and identity of sorts, but defining it becomes increasingly problematic. Let me explain:

Throughout 2009 and 2010, we were listening to a heap of bands and artists that were clearly starting to coalesce into some form of vague and abstract grouping. Either through sound, technique, image, a reverence for the past, or just a common, skewed take on a hauntalogical notion, there was a broad church emerging that would count these artists among their flock.

Fortunately, no one dared to define it. If you speak of the devil, he’s sure to appear, thus keeping quiet and refusing to conform to definition worked well for all concerned. Having no such definition, and thus having artists co-opted or excluded based solely on the whims of the individual listener, was the perfect scenario.

But, of course, someone had to define it, and in doing so, they killed it. Hipster Runoff dropped ‘chillwave’, The Wire started talking about ‘hypnogogic pop’.  Then followed glo-fi, witch house, drag, screw gaze and so on and so on. (Our favourite remains ‘crunk shoegaze’ – meaningless, yet somehow quite endearing).

The list of artists lumped together under these various microgenres was often contradictory and bafflingly random – they were subsumed to the will of the writer, desperate to force round pegs into square holes. And once this grouping was anointed with such dubious definitions, the scrutiny began – spotlights were shone in all manner of places, and backlashes naturally came thereafter. The edifice soon crumbled.

We, on the other hand, are (after all) here – ‘down under’ – doing our own thing, far removed from such recklessness. We have our own obliquely connected and amoebic group of similar artists, remaining unaffected by trend, hype or weak stylistic interpretation. And it is to this group that we turn for this compilation. If, by virtue of their geography, they had birthed their projects in North America, they might well have all been raped and pillaged by now – raked over the blogeratti coals for their part in an ill-defined ‘scene’.

Although our upside-down location can often be a curse, in this case it’s a blessing – all these artists survived unscathed, their mission no more or less impossible, living another day to ‘fight the good fight’. And we shall leave this group unnamed, for all our sakes. Suffice to say, it’s another new, weird slice through the unsung underground of abnormal Australian music.

Postscript: At the time that this compilation was looking for its own defining title, we were saddened to hear of the passing of Trish Keenan from Broadcast.  As a band that pursued its own unique investigation of such territory and no doubt inspired many of these artists in whole or in part, we chose to draw on a highly pertinent track title from their 2009 release ‘Broadcast And The Focus Group Investigate Witch Cults Of The Radio Age’.  And it is to Trish that this release is respectfully dedicated.

“Focusing on a group of electronic artists steeped in the ominous will of what we would call in the western hemisphere “Hypnogogic Pop” or “Hauntology”. For the most part these guys succeed in distinguishing themselves as a different breed, but all in all it shouldn’t really matter. It’s a pretty good deal, and the quality here is not too shabby.”
Foxy Digitalis, June 2011

“NWA is a non-profit initiative promoting “new, eclectic and experimental Australian music.” Their latest sampler, “We Are After All Here,” succeeds on all three counts. I’d recommend this compiliation on purely break-your-routine grounds, but several tracks stand out; my FLFs (First-Listen Favorites) are Horoscope from NO ZU, Camryn Rothenbury’s Racing Across the Void, and Cannibal Cod by Desfontane.”
Cognitive Buffet, May 2011

“I’m very excited to introduce the eighth and latest New Weird Australia compilation, entitled We Are After All Here [and] a track-by-track description of the release in its myriad glory … Stitched Vision craft blissful electronic drone with billowing, textured furls—not unlike the music of Ben Frost or Tim Hecker … [No Zu’s] soundscape hearkens back to a lost era of electronic psychedelia—reminiscent of both early Kraftwerk and late Roxy Music … The NWA comps have consistently featured music which depart from world-music influences and arrive on the other side of the frontier’s horizon”
Reviler, February 2011 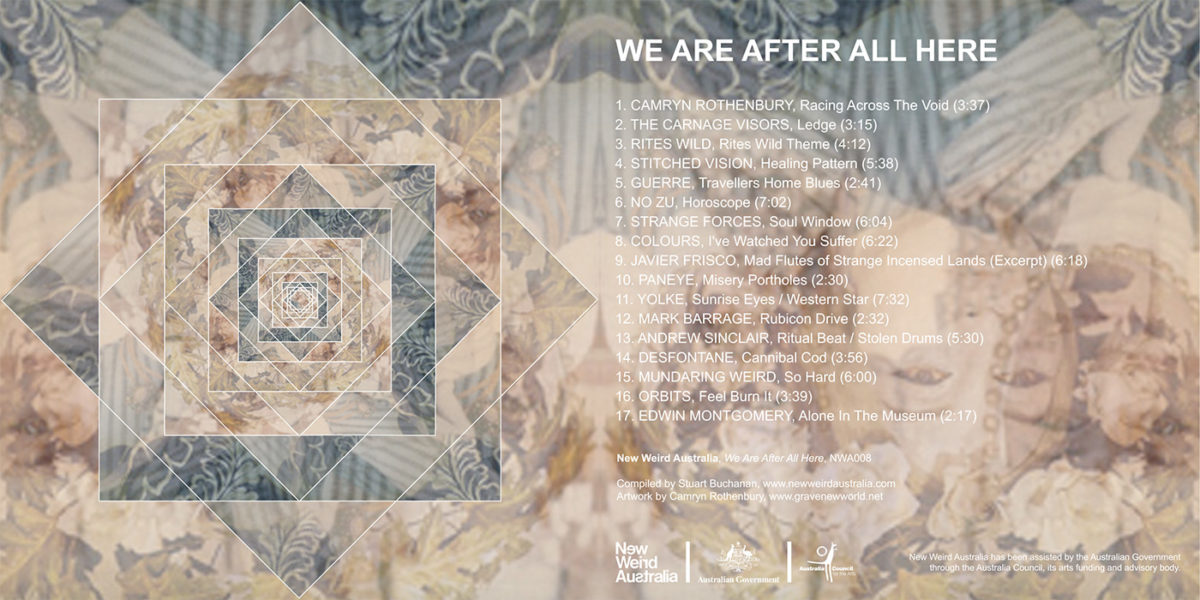