New Weird Australia and Fallopian Tunes team up for a compilation double-header.

Finding Fallopian Tunes’ early release ‘Berlin Mixtape‘ was nothing short of a godsend.

Hunting down music to play on the weekly New Weird Australia radio show is never a chore, the hunt can be both exhilarating and frustrating. Yet, finding one relevant new release may take hours, and only yield a single track. Hence the night when ‘Berlin Mixtape’ was discovered remains firmly etched in memory – sixteen tracks of new, eclectic and experimental Australian music, and all of them gems. The concept seemed eerily, and generously, familiar. Naturally enough, the mixtape received a ritual flogging on the radio show – I simply couldn’t get enough of it – and it also conveniently led to the first release on the then nascent label, the stunning debut from Yolke, titled Poppy Wash. Yet, at the same time led nowhere – Fallopian Tunes had no web site, and little web presence – which, contrary to what a manager might tell you, simply added to the allure of the label.

Many months later, we finally met each other virtually, complemented each other for our respective output, and danced around the idea of perhaps linking arms and working on a shared release. ‘Gloss & Moss’ is the result: 22 tracks, 11 a-piece, representing precision and imprecision – controlled chaos and chaotic control. In splitting hairs over definitions, this ‘Australia Mixtape’ has both its cake and devours it – we can pay attention to the difference, or ignore it all together. Like Fallopian Tunes and New Weird Australia, it’s two sides of the same coin – a collection of exceptions that prove the rule.

The idea of Gloss & Moss had seduced me from the beginning; two texturally different sounds with a similar headspace between them. When Stu and I first started talking about this compilation, a whole host of different ideas came up – synthetic nature, granular treetops etc… It was always going to be interesting collecting the sonics for it.

Its hard to really call anything on this compilation experimental music, all the artists have their shit locked down and know exactly what their doing. The experimenting is done well before anything is made. But all the same, experimental music in Australia is starting to gain a foothold and it’s exciting to see the scope of different things people are doing.

This collection of tracks really brings the assorted flavours of what people are up to in and around Australia and the little soundworlds they create for themselves. Everything from glacial ambience to typewriting textures is represented here, its a small cross section of the lush pool of ideas floating around the Ausmos (Australian cosmos).

“Gloss & Moss is the product of a kind of Omnivorous Experimentalism that, it seems to me, is increasingly prevalent these days, not just in Australia but just about everywhere with the luxury of a broadband connection. Because the vast data sea doesn’t just need curation; it also invites exploration and exposure to the new and different. And this exploration, it turns out, is something that can be curated too. Where some might regard the sort of eclecticism I’m getting at here as simply a lack of focus … I tend to think of it as precisely the reverse. Gloss & Moss, as with so many of New Weird Australia’s releases, is focused precisely on the strange and eclectic. You could say the same about this website actually. Omnivorous Experimentalism — the capitals here are deliberate; they’re intended to suggest something like a genre — is virtually its modus operandi.”
Tiny Mix Tapes, August 2012

“The recent Gloss and Moss compilation by Fallopian Tunes and New Weird Australia shows just how rich and diverse our experimental electronic music scene has become. It is, if you’ll forgive a little editorialising, an essential (free) download.”
The Thousands, July 2012

“Every other month or so the avant-garde program New Weird Australia releases a compilation of tunes … Each collection is a gilt digital artifact of fresh composition, edgy-yet-accessible aesthetics, and solid cultural ambassadorship. For the latest compilation—called Gloss & Moss—NWA teamed up with a similarly Down Undered DIY electronica label, Fallopian Tunes. The team present starkly different sides of the continent’s underground music scene. The first half belongs to Fallopian Tunes, which chose eleven tracks of smooth ‘n’ throbbing bedroom electronica of various stripes. Although many of the featured artists operate in familiar genres—glitch, trance, beat tape—many songs are bolstered by found sounds and surprising noise samples … New Weird Australia curated the second half of the compilation … You’ll hear fuzzed-out dream pop, trudging kraut, and slow Eastern-influenced psych rock (a la Grails) … it goes without saying, you should download the entire New Weird Australia and Fallopian Tunes discography. Like, yesterday.”
Reviler, June 2012

“The latest New Weird Australia compilation sees the weird ones pairing with one of my favourite local labels Fallopian Tunes to assemble a zesty sonic soup of experimental and psychedelic sounds. Great to hear new stuff from favourites like Yolke and TRJAEU, and to discover very cool acts like WORNG and Secret Birds. Go do some discovering yourself, it’s a free download.”
Bandcamp Hunter, June 2012 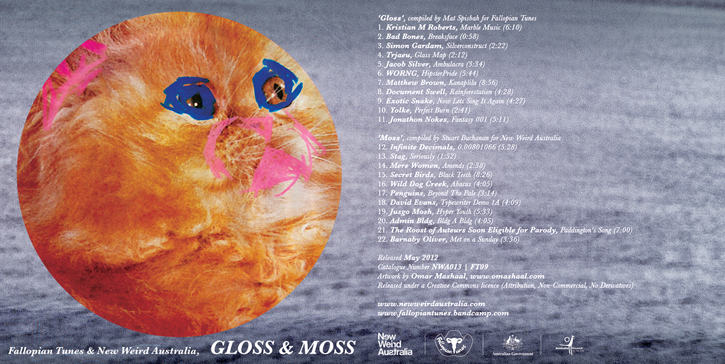