The artists that represent Volume Three of New Weird Australia truly stretch, invert and redefine the notion of ‘weird’. To some, this selection might well be perilously unlistenable, to others we’re toying dangerously with pop at various flash-points throughout the compilation. And therein lies the point.

The old adage still holds true – one man’s meat is indeed another man’s poison. Divert the same philosophy to music and the song remains the same. One woman’s rock is another woman’s roll – or thereabouts.
We make this point to simply note that our definition of ‘weird’ is purely subjective – and we make no claim otherwise. The artists that represent Volume Three of New Weird Australia truly stretch, invert and redefine the notion of ‘weird’. To some, this selection might well be perilously unlistenable, to others we’re toying dangerously with pop at various flash-points throughout the compilation. And therein lies the point.

Our mission is not to meticulously scope and define what is to be ‘weird’ (#FAIL). Our mission rather is to map out a loose terrain – one that skirts around the topological spread mapped by mainstream alternative media, and one that sits both simultaneously in and out of reach. New Weird Australia is designed as a bridge to reach fresh pastures – at some points that journey might feel familiar, at others it might be terrifyingly new.

Given that we’re now on our third volume, we understand that in order to go deep, we also have to go wide – which means fucking with the boundaries at both ends of the spectrum. From Zeal‘s quasi-Anticon hip-pop to Anon‘s 14-min noise excursion, Volume Three does indeed traverse considerable distances – along the way winding via Lecter Macabre‘s pitch-black slow-mo roar to Pompey‘s steel-drum romp that winds the set towards a final, optimistic flourish. We could obviously go much wider and much deeper yet – there lies new worlds to conquer in future volumes.

For now, for this month, this is our definition of New Weird Australia. Some you’ll adore, some you’ll abhor – and with that very disagreement, we’ll all find common ground.

Throw Shapes “a meticulously curated exploration of left-field sounds – surreal, sublime atmospherics through to experimental electronic pop through to ten minute noise jams, all seamlessly ordered, and all from our very own shores”

Liz Berg, WFMU (NYC) / Free Music Archive “I’ve been hitting a few compilations pretty hard lately on the FMA, and I must say that a recent favorite has been “New Weird Australia, Volume 3.” …From mellow and woozy songs fit for a dream sequence, to repetitive krautrock jams, to dainty acoustic prances, to experimental electronic hiss, drones, and moments of glitch. This album won’t start any parties, but it does wonders if you’re driving, in a contemplative mood, just waking up, or stuck inside on a grey day.” 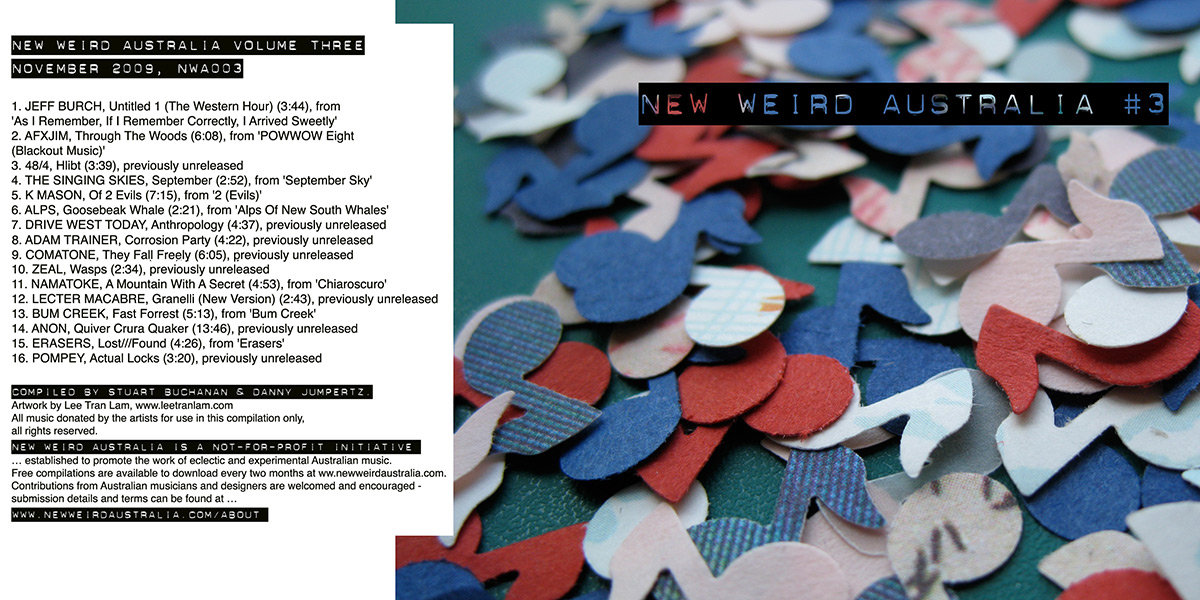