All music donated by the artists for use in this compilation only, all rights reserved.

Thanks to all the artists for the leap of faith in donating their tracks for the first volume in this initiative. Special thanks to Danny Jumpertz and to Adrian and Blake for their early support.

Geography dictates that, to some, Australia may forever remain as the Romans once saw it, as the “unknown land of the south”. However as technology conquers territory, distance becomes increasingly insignificant – a fact that is clearly illustrated on this first instalment of New Weird Australia. In borrowing (and expanding) ‘new, weird’ terminology, we hope to shrink the notion of distance between innovative Australian artists and their international compatriots; between the dot points on the vast map of our own land and between definitions of genre, taste or style.

For Volume One, we find ourselves narrowing the gap of the 4,000km range from the precision edit and bluegrass glitch of Brisbane’s Anonymeye, to the free-jazz of Yugoslavian ex-pat and Perth resident, Predrag Delibasich. We simultaneously compress time – moving from Pimmon (a renowned experimentalist with a significant international back catalogue) through to Kyu, a nascent duo freshly ripped from the Sydney soil. We additionally garner exclusive tracks from Telafonica, Tom Smith (of Cleptoclectics), Raven and Inquiet, and recent releases from Clingtone, Lessons In Time, Battlesnake, Loom and the inappropriately named Brutal Hate Mosh.

Neither popular nor alternative, neither one genre nor another, New Weird Australia represents a new breed of Australian musicians that find refuge in the space between us.

A-Reminder believes that “It’s projects like this that make this whole internet/music thing really, really exciting” 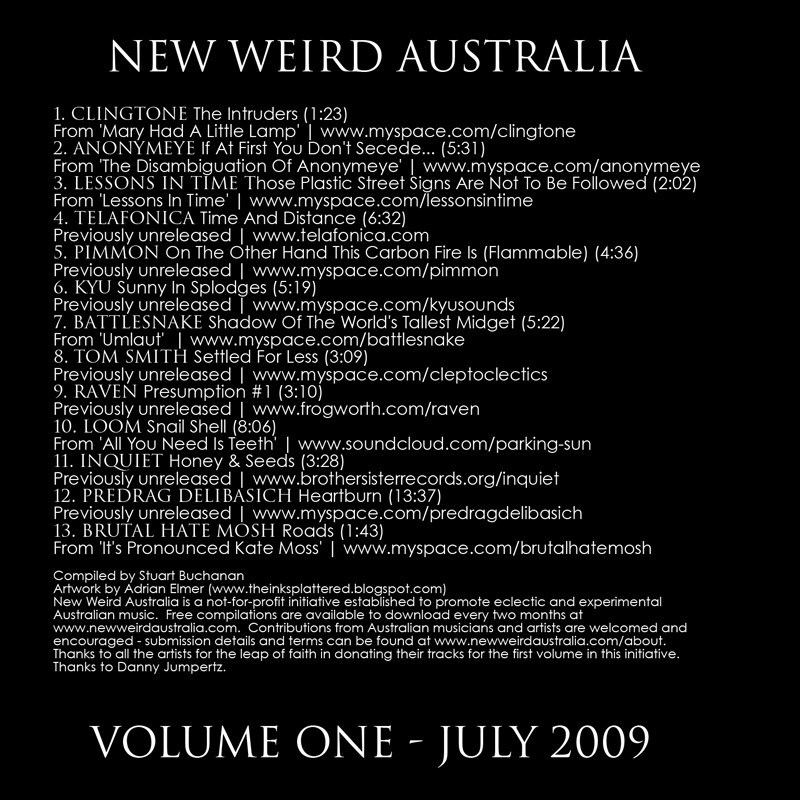