The fourth entry in the New Weird Australia compilation series.

What’s in a name?

In attempting to find answer that question, and thus establish a title for this very project, there was a solitary guiding idea – that the artists shared a deep common bond, beyond just an experimental approach to music making. In their own unique ways, we believe that each artist on New Weird Australia shares a disdain for any cabals of musical ‘authority’, an irreverence to established industry etiquette, a rejection of art neutered for acceptability, and ultimately a dismissal of ‘rules of behaviour’ in contemporary music practice. Their music exists in an autonomous zone of their own construction, unburdened by any sense of what ‘should’ or ‘shouldn’t’ occur.

In broader Australian culture, the comedic variant of this sensibility is often referred to as ‘larrakinism’ – characterised by the mischievous or outlandish ‘larrakin’, who gleefully flaunts regulations and standards set down by society. The nemesis of every po-faced ‘do-gooder’ in the country, the larrikin takes the piss, flaunts convention, and pushes buttons and boundaries with great abandon.

Although this action is universal, the word ‘larrikin’ is perceived as a quintessentially Australian definition, with roots as far back as the 1860s. In one of its earliest occurrences, the larrikin is beautifully cited as a “young urban rough”, although its lexicological roots suggest it was born of a conjunction between ‘leery’ (‘wide awake’ or ‘knowing’) and ‘kinchin’ (‘youngster’). Most of its recorded use in the late nineteenth century always seemed to involve both thievery and mischievousness.

Transgressions against boundaries or conventions, rejection of norms and standards handed down by an authority, all wrapped in a roughish youthful spirit – whichever way you cut it, the larrikin sensibility is writ large in New Weird Australia. No more so than in this particular volume – where Textile Audio takes both classical and operatic blueprints, and weaves them around found sounds and abstract electronica; Tasmanian duo Paint Your Golden Face rethink and reshape the fundamental essence of the male voice choir; Reunion Sacred Ibis cuts a sharp sheath through archival sounds in a spirited slice of plunderphonics; Gold Tango reinvent Kraftwerk with an unexpected tribal swagger; and Scattered Order stick two well-placed fingers up against the very idea of ‘heritage rock’, their original line-up reforming after over 25 years, with their innovative touch still absolutely to the fore – delivering an exclusive cut from their (very) long-awaited new album.

This entirely Australian larrakin paradigm – an irreverence to a learned authority, maverick thievery, a rejection of etiquette – it may help to explain why ‘New Weird Australia’ is ripped directly from ‘New Weird America’, a phrase coined by Scottish journalist David Keenan in 2003 to define a new breed of American psychedelic folk or ‘free folk’. Since then, ‘New Weird America’ has been used in a variety of ever changing contexts – cited in artandpopularculture.com as “[finding] inspiration in such disparate sources as heavy metal, free jazz, electronic music, noise music, tropicália, and early- and mid-20th century American folk music”. Any perceived rules of definition are clearly dubious.

‘New Weird Australia’ does what it says on the tin. It’s new, weird, Australian music. Thus, we felt compelled to appropriate (nay, thieve!) Keenan’s nomenclature for our own ends. Sure, it’s a bastardisation. Sure, it’s wrong-headed. But if in the rejection of a guarded sense of ‘what is right’, we put even more noses out of joint, then more power to us. And while the odd prude may cry ‘plagiarism’, they might well be missing the point.

Consider it even more broadly, reduce it to its simple acronym. The letters N,W and A. And, there once again, for a second time over, we steal where we shouldn’t steal from, we tread on toes that we shouldn’t tread on – in fact, we clearly reject any notions of what we should and shouldn’t do. An ideal I’m sure both the American freak folksters and the late Eazy-E would readily connect with.

Now Like Photographs, Minneapolis – Record Of The Week “If you need a primer on what is fresh from Australia’s music scene, look no further than New Weird Australia.”

Electrorash “More eclectic, eccentric and often amazingly beautiful tunes … pick up the whole shebangabang for $0.00 AUD. That spells value in 4568 of the approximately 5000 recorded spoken languages known to linguists.”

Daily Beatz (on Tantrums from NWA4) “Could New Weird Australia be the Australian counterpart to Ann Arbor’s Ghostly International? Based solely on this song, I would say yes.”
Throw Shapes Interview 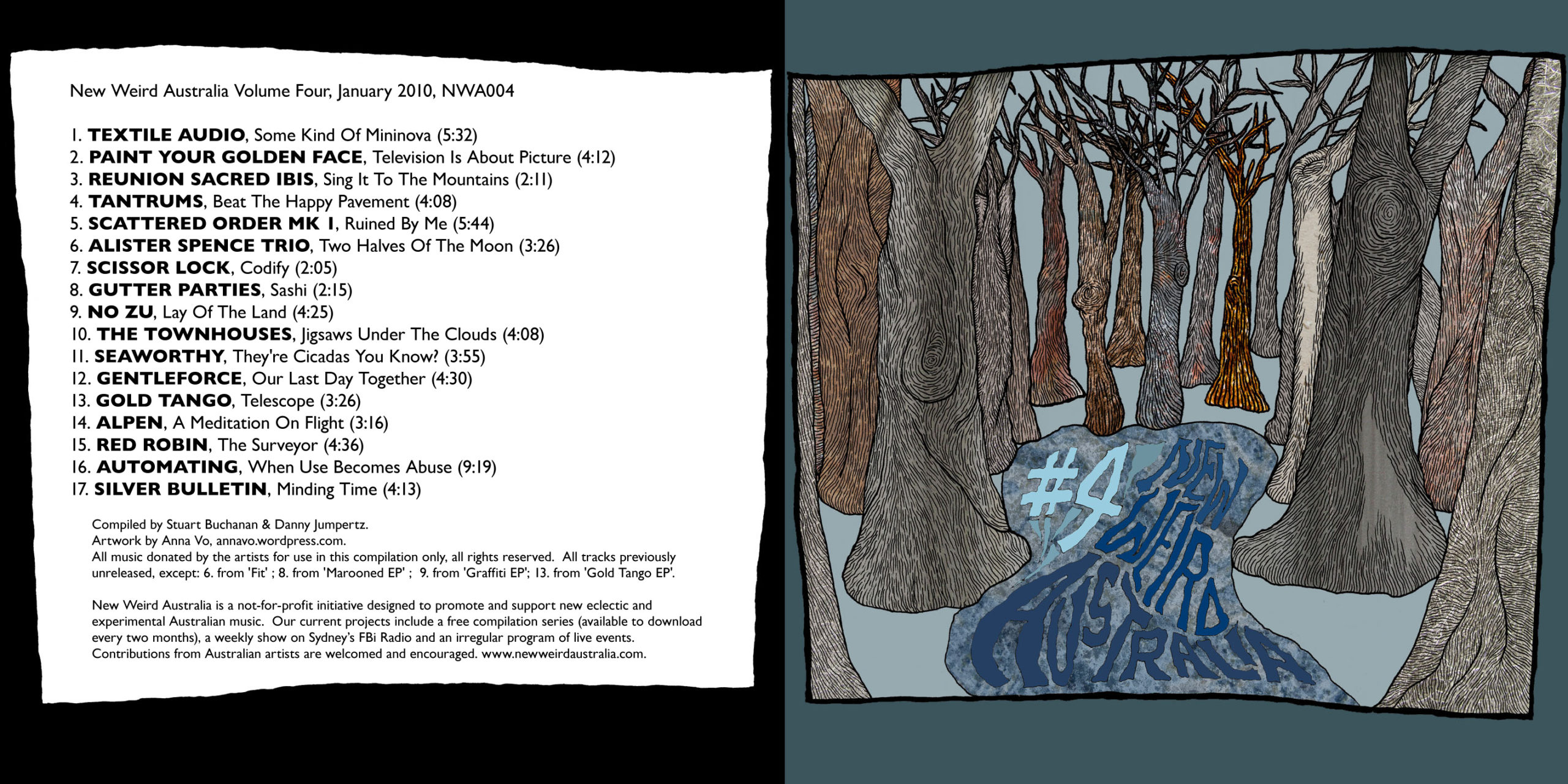