“This isn’t your Slayer or Metallica or Pantera, to be certain. It’s heavy sonic seance shit. Big walls of fuzzed out guitars or sludgy numbers swimming in the murky murk or knob twiddling feedback frenzies or straight up droooooooone or sort of industrialized punk frock and ghoul. It’s all here, it’s all hear.” Grindtheives

I once attended a lecture in Liverpool by sociologist Keith Kahn-Harris where he described heavy metal as an essentialist ideology, a genre of music borderline obsessed with what it means to be a ‘true’ heavy metal fan. Expanding on this, Kahn-Harris was careful to point out that this ‘trueness’ was not fixed in reality. Unlike punk and hip-hop, heavy metal does not aim to authentically represent everyday life. Instead, metal operates in a much more fantastic realm: it pushes aside the complexities of everyday life and replaces them with myths and stories about ‘power, conflict, violence and death,’ all the good stuff. It works – and we like it – because, like all other popular music genres, it delivers us from mundanity.

Why is this relevant here? Because it is metal’s essentialism that makes it so pliable. There is no fixed, grounded core to heavy metal and we’re all starting to realize this. While Slayer will always be metal, in 2011 an ambient experimental duo can also be metal. A popular music festival can be metal. A cartoon can be metal. An online cooking video can be metal. And despite what teenage virgins everywhere will tell you: this is a tremendously good thing. It is metal’s ability to channel its fantastic, ominous, silly, amazing essence through anything a self-ordained metal-head picks up and calls metal, that gives the genre it’s true power. Diverse things thrive.

When Stuart and I first started thinking about this compilation, we had very meager ambitions. In short our aim was to document weird heavy shit happening in Australia. Along the way, we started to think this was actually heavy metal. First, Eli from Heil Spirits describes what he does at a party as ‘thrash metal’. Then we hear the black metal tinkerings of Spheres, the Godflesh inflections of Hobart’s Machines Of Indeterminate Origin and the brittle textures at the top of the mix in AXXONN (and remembered Tom’s ever present Motely Crue tee). We had a band called Machine Death, how could we ignore this? We realized that without much thought, we’d wandered into Australian heavy metal’s underbrush.

In the end that’s why we’re calling this compilation Bleak Metal. That and fuck you, that’s why. But also relevant is an article from The Guardian published a few years back now. Writing on Grief No Absolution, Louis Pattison described them/him (who knows?) as bleak metal. Pattison wrote of how the genre name sounded apt enough for such a wintry sounding sound but also of how he felt it appropriate because, well, that’s what Grief No Absolution themselves were calling it.

“Well this is a revelation. In the 400 or so posts on Ducks Battle Satan, this is the first time that I’ve ever reviewed a compilation … The bands on this run the full spectrum of noise nastiness from the noise/doom/DanFriel-esque of Axxonn, the black metal of Blutennacht to the sine wave crackle noise of Alex White. The mighty psychedelic noise metal of No Anchor makes an appearance in Dead Pony but the absolute killer for me was the track from Dead Boomers which is a glorious exposition of rumbling noise. Another highligh is the Lightning Bolt ferocity of the fantastically lo-fi Dies on Plane’s. Their track Hunting For Teeth starts full of Sword Heaven malevolence before launching into some groovy post-metal throb. In fact there is hardly a dud on this.”
Ducks Battle Satan, February 2012

“Stu Buchanan (with help from Ian Rogers) has put together the latest New Weird Australia compilation called “Bleak Metal” focused on the more avant side of Metal (Avant Metal/Black Metal and other experimental forms). Of the 13 artists only Axxonn and Undecisive God where the ones I am aware of, so lot’s more to discover.”
Twice Removed, August 2011

“Australia comes through once again with the goods, though. On the real. Courtesy of New Weird Australia (you know you love it already, based solely on the name!), here’s a collection of music entitled “Bleak Metal”. That’s about as good of a descriptor as one could hope for, in terms of nailing down what the music is in a clear and concise manner. Essentially a compilation consisting of 13 tracks of music tinkering in the realms of metal and other things. This isn’t your Slayer or Metallica or Pantera, to be certain. It’s heavy sonic seance shit. Big walls of fuzzed out guitars or sludgy numbers swimming in the murky murk or knob twiddling feedback frenzies or straight up droooooooone or sort of industrialized punk frock and ghoul. It’s all here, it’s all hear.”
Grindthieves, July 2011

“Bleak Metal is full of heavy, fucked up and generally ace new music from Australian artists (but then, you could have got all that from looking at the record cover). Particular highlights include Ambrose Chapel’s “Undead”, Axxonn’s “From Black’s Void”, Machine Death’s “You Ruin Everything” and the absolutely epic “Customer Service Experience” from Alex White. There’s a lot of longish, heavy drone here. This is perfect timing for my plans for the weekend, which largely involve testing how loud my stereo can go and, on a completely unrelated topic, pissing off my neighbours who seem to think it’s cool to have loud parties until 5am on a Monday night.”
Life Is Noise, June 2011

“Our newest intern, Tom Hall, has a track from his band Axxon on this comp (the lead off track, no less!). We haven’t heard it yet, but dude seems to have some taste, so we’re hoping it’s awesome. If we find it un-good then we probably won’t tell him anyway;) Dig it!”
Hydra Head Industries, June 2011 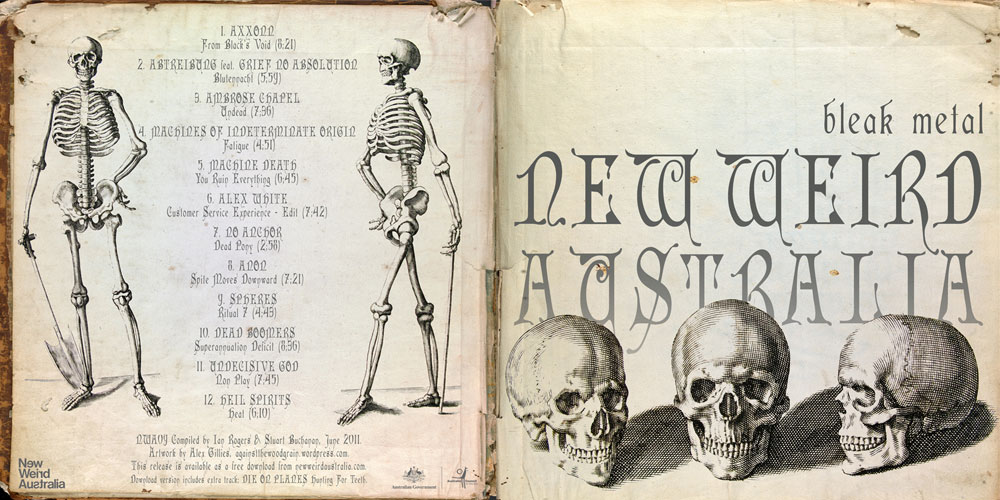